Born in Sebewaing, Mich., Manske grew up in a family of Lutheran school teachers. He considered a career in law but felt called to pursue professional service in the Lutheran church. He attended St. John’s College in Winfield, Kan. (A.A. 1952); Concordia College in St. Louis (B.A. 1954); Concordia Seminary, St. Louis (M.Div. 1958); Washington University in St. Louis (M.A. in Sociology-Anthropology); and the University of Southern California, where he earned a Ph.D. in Social Ethics (1979).

After a 10-week summer visit to Southern California in 1953 to work with Lutheran congregations, Manske saw great opportunities for the church because of the region’s ethnic diversity. Upon returning to his studies at Concordia Seminary, he wrote a set of life goals. One of them was to “start a new Lutheran college in Southern California.”

In 1973, during his 15 years of serving as campus pastor at the University of Southern California, Manske was asked by a group of Lutheran leaders in Southern California to help establish Christ College Irvine. Known for his determination and his track record as a campus minister and spokesperson for the church, in 1976, under Manske’s leadership, Christ College Irvine launched its first academic year with 36 students in a single building that housed dorms, classrooms and administration offices. Manske served as president until 1979, when he transitioned to a faculty position.

Even though he was the founding president of Christ College Irvine — now Concordia University Irvine — Manske was perhaps best known as a gifted teacher and mentor to students. From 1973 to 1998, he taught on the topics of theology, ethics, world religions and Christian apologetics. He also served as director of graduate programs in the School of Arts and Sciences, establishing the Master of Arts Program in Reformation Theology, and the Ethnic Pastors Certification Program, now called the Cross-cultural Ministry Center, a four year, in-residence seminary curriculum in cooperation with Concordia Seminary, St. Louis.

Later in his career Manske developed the television series “Christianity on Trial,” which focused on issues of Christian apologetics, Reformation theology and world religions. The 82-program series ran for six years with Manske serving as producer and host, winning four Angel Awards for excellence in media in international network television. He also produced the TV program “Point of Truth” and served as a member of the LCMS Board for Communication Services.

Manske was instrumental in the founding of an LCMS congregation — “the only Lutheran presence and ministry” — in the Cayman Islands, according to Pastor Leif Hasskarl, “and is still fondly remembered here by many of the original parishioners.” Safe Harbour Lutheran Church, formerly Christ Lutheran Church, was started in 2001 “to bring Christ to the residents, expatriate workers and visitors” to Grand Cayman Island, he said.

Concordia University System President Rev. Dr. Dean O. Wenthe said Manske’s “vision for combining rigorous intellectual engagement with an articulate defense of the Christian faith in Lutheran higher education has been a blessing not only to Concordia University Irvine but to the entire church.

“His warm, personable and caring manner served to recommend that vision to colleagues and students alike,” Wenthe told Reporter. “As our culture becomes more challenging, the wisdom and foresight of his leadership becomes all the more evident. Throughout his manifold labors and achievements there was a clear witness to Jesus Christ as the Way, the Truth and the Life. We give thanks for God’s grace in sending such a servant who now rests in his Savior’s arms.” 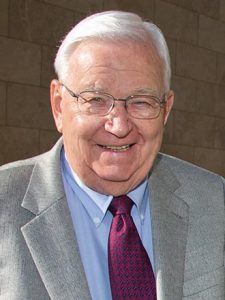